First Published in The Age & The Sydney Morning Herald, 2017 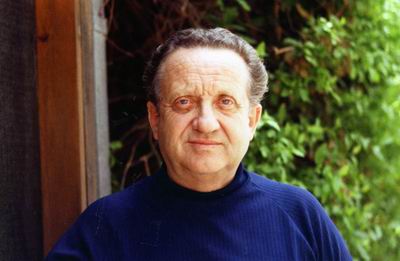 He arrived from Warsaw in 1937 on the same boat as this writer's father and shared a house in Carlton with his sister, the dancer Ruth Bergner, and quickly found the 'Heide' gang of Arthur Boyd, Albert Tucker, Noel Counihan, Sid Nolan and Vic O'Connor.

Unlike the Australian painters, at 17 Yosl was a fully developed painter of the German Expressionist tradition heading into Social Realism, which he preferred to call Social Humanism.

He shocked the staid art world with his painting 'Aborigines Chained To A Tree' an image he had seen in the Sydney Morning Herald and then painted in oil on masonite - canvas being too expensive in an Australia still recovering from the Great Depression.

While news pictures of such horrific events were acceptable, the idea that they could be reproduced as art was beyond contemporary belief. Even the young artists he met, who would go on to become our greatest artists, were still painting flowers in vases and pretty landscapes.

Yosl said that with all the trauma in the world he couldn't paint pretty pictures, so he painted the human condition - and is believed to be the first Australian painter to do so. He and his contemporaries believed that art could change the world.

Yosl was born in Vienna, but his family moved to Warsaw when he was an infant and he grew up in the Jewish neighborhood around Novolipki Street. It was a vibrant community, but the rise of anti-Semitism was clear and many families were attempting to emigrate.

His father, known as Melech Ravitch, was a writer and intellectual who translated Franz Kafka into Yiddish. In 1934 Ravitch undertook an expedition to the Kimberleys in Western Australia to see if the region would be suitable for the yet-to-be-formed Jewish homeland. The fruitless journey laid the ground work for other members of the Bergner family to migrate to Australia, just before the Holocaust.

Yosl's sister Ruth arrived in Australia in 1936 and in 1937, Yosl followed. He was accepted as a student at the National Gallery School and between a range of part-time and casual jobs, including selling socks at Victoria Market, painted some of his most impressive early works.

Two of Yosl's early works stand out: Aborigines Chained To A Tree and The Ghetto Wall. The profiles of one of the Aboriginal men and the Jewish father are identical - an expression of "God, why have you forsaken me?"

Yosl was briefly married to Marisha (Mary) Tauman but in 1948, left Australia for Paris where he re-met fellow National Gallery School student, Audrey Keller, who would become his life-long partner and mother of their daughter Hinda.

Yosl and Audrey visited New York in 1950 and moved to Safed in Israel, later settling in Tel Aviv, where they both wrote and painted.

Yosl is affectionately known in each country as one of their greatest painters. He was heavily influenced by the writing of Franz Kafka and following an exhibition of his Kafka paintings in the Czech Republic, hosted by the Franz Kafka Society of Prague, is also considered to be one the Czech Republic's leading painters, despite never living there. Yosl always found it easy to fit in. 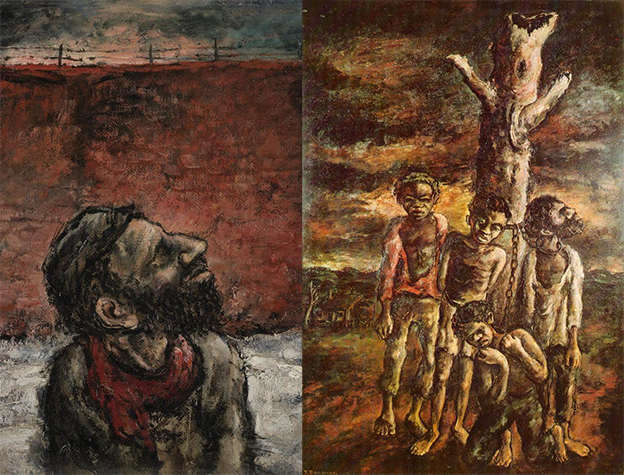 Yosl Bergner's paintings "Aborigines Chained To A Tree" & "The Ghetto Wall" share a striking resemblance in the expression of each painting's profile-facing subjects.

In Israel, Yosl was unable to paint the politics of the country, but there are allusions to it with birds flying through the wings of butterflies. Having grown up in the non-Zionist socialist Jewish Bund and later a member of the Communist Party of Australia, he said that he was never a Zionist, but hated anti-Semitism and that is how he ended-up in Israel. Much of his work - like Arthur Boyd's - is rich in symbolism and can take quite some time to understand.

But there is also love and playfulness and joy at innocence. Everywhere in his studio are toys and cheese graters, hurricane lamps and other household objects that find their way into his paintings and drawings.

In 1985, Yosl donated a body of work to the National Gallery of Victoria, and a retrospective exhibition was held at the Banyule Homestead in Heidelberg. While Audrey has returned to Melbourne for exhibitions, it was the last time Yosl would see the city of his most formative years.

The film-maker Trevor Graham took the opportunity to interview Yosl while he was in Australia and the subsequent award-winning documentary 'Painting The Town' changed direction from the original concept of telling the story of the painters of the 1940s to focusing on Yosl. (The DVD is available here, through Ronin Films in Canberra.)

Yosl was also the recipient of the Dizengoff Prize, the Israel Prize and was made a life member of the National Gallery of Victoria. His images have illustrated many books and he designed costumes and sets for numerous stage plays.

Just 12 months ago - pretty much to the day - we said goodbye to Yosl and Audrey at their home in Tel Aviv, having earlier spent some time with them and introduced my children, Alex, Yosl Arthur (named after Yosl and Arthur) and Joshua.

While he had slowed physically, he had not changed intellectually and was still working in his studio every day. The smell of oil paint and gum turpentine rich to the nostrils.

We went to the studio and Yosl pulled out pictures from the racks and toys and musical instruments and entertained us for several hours - even though we only meant to drop in for 30 minutes.

His death is a great loss to the world arts community, especially for Australia and lsrael.

Yosl is survived by his wife Audrey, their daughter Hinda and her children and his sister Ruth.