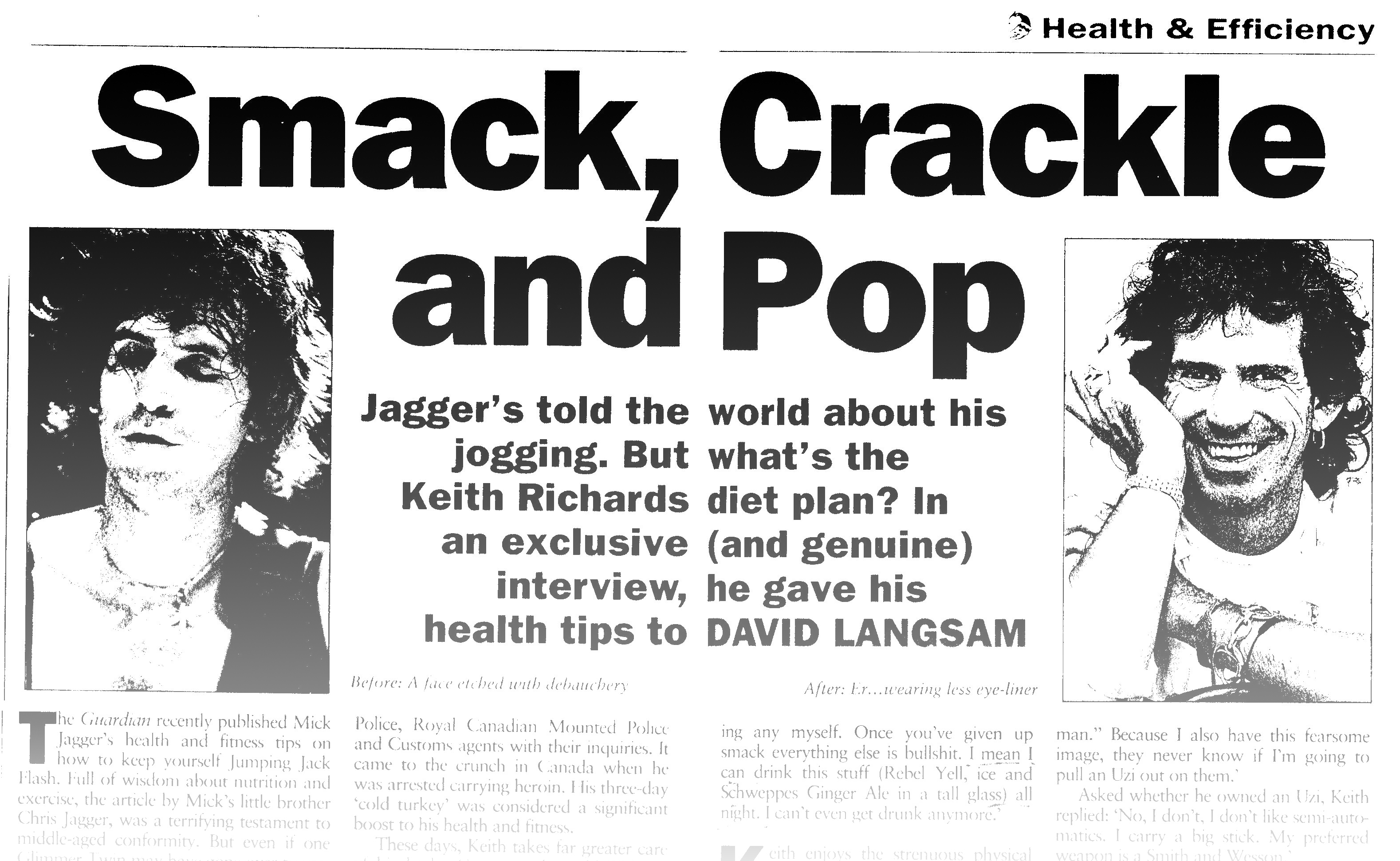 Mick Jagger has told the world about his jogging. But what's the 'Keith Richards Diet Plan'? In an exclusive (and genuine) interview, he gave his health tips to David Langsam.

The Guardian recently published Mick Jagger's health and fitness tips on how to keep yourself Jumping Jack Flash.

Full of wisdom about nutrition and exercise, the article by Mick's little brother Chris Jagger, was a terrifying testament to middle-aged conformity. But even if one Glimmer Twin may have gone over to aerobics and brown rice, the other - the man they call Keef - still flies the flag for toxic shock.

Over a couple of bottles of Rebel Yell bourbon, the divinely-haggard string-strummer revealed what kept him so young and lovely.

Childhood, it seems, was a crucial influence. Just as Jagger was influenced by a father who was a PE teacher, so Mr Richards senior played an important role in young Keith's regard for the sanctity of the temple of the body.

"He's as tough as nails and could still drink us all under the table. I love the guy and we have great times together. I come from a hard-drinking family and it's in the genes, I guess. I'm in touch with that otherwise I wouldn't still be around."

As a gentleman musician, the 47-year-old Richards has on occasion found himself helping the Drug Squad, Metropolitan Police, Royal Canadian Mounted Police and Customs agents with their inquiries.

It came to the crunch in Canada when he was arrested carrying heroin. His three-day 'cold turkey' was considered a significant boost to his health and fitness.

These days, Keith takes far greater care of his body. Gone are the wild 72-hour drug parties, and although he slurs the odd word, he is in almost as fine shape today as he was in the early Sixties when the Rolling Stones first went on the road.

It is true that for his 1988 Talk Is Cheap solo tour he played with an ashtray taped to the microphone stand to save walking all the way to his amplifier and speaker stack and that he has no objection to starting his working day with a large glass of whiskey and dry. Would he ever try drugs again?

"If there's some good shit around. Now and again. But I go for connoisseur's shit. I don't mind a good smoke when I can get it, but I just gave up having anything around. If there's something around a dressing room... yeah... fine. A quick hit of that... Bvoom."

"I'm not going to say no if somebody passes me a joint. I gave up buying or having any myself. Once you've given up smack everything else is bullshit. I mean I can drink this stuff (Rebel Yell, Schweppes Ginger Ale in a tall glass) all night and I can't even get drunk anymore."

Keith enjoys the strenuous physical exercise of walking around town and in New York City that can be a serious challenge to one's health. It could rain and he might catch a cold or have to run from fans or even risk being mugged. But he has worked hard to be able to overcome these risks to his body.

"In New York I take the dog for a walk and it starts to rain and a cop car drives by (and they call out) 'Hey Keith, you want a lift home man? You'll get wet.' Very fortunate. People just take me as I am."

"If I'm walking and I turn a corner and there's some school just coming out or some students are coming out of some college, then it can be a hassle because they're coming en-masse and someone says: 'It's him.' I either run for it or ease my way through, give thanks and an autograph."

"I've had muggers come up to me and suddenly stop and say: 'Er, can I have your autograph? We don't want to screw with you, man'. Because I also have this fearsome image, they never know if I'm going to pull an Uzi out on them."

Asked whether he owned an Uzi, Richards replied: "No, I don't, I don't like semi-automatics. I carry a big stick. My preferred weapon is a Smith and Wesson."

Does Keith view the past 25 years of physical self-abuse with regret, or merely as a springboard to the fine example of health and fitness he represents today?

He says it is important to be in tune with one's physiology. The man best described as 'the walking chemical laboratory' says one has to know one's limitations.

"I have an innate knowledge of my body. I don't know how it works - I'm not a medical man in that respect - but I'm very much in tune with my body and I come from very tough stock."

"That's why I can't recommend anything to anybody else, because a lot of people can't smoke a joint without going into tremors and there's other people, give them one drink and they're out of their brains already."

"I mean it's a matter of balance between what you can ingest and what you know your body can take. I happen to be fairly tough in that respect."

"I come from a hard-drinking family... it's in the genes"

See the original interview with Keith Richards from 1989: Ladies and Gentlemen!