Gary Willis is a disturbing artist. His images, reflecting the inner thoughts we sometimes speak but rarely enact, are not intended to be "nice pictures". Willis has always been something of a tearaway, growing up around south east Australia in the radical Sixties and Seventies, prepared to lose blood on stage in the name of art.

He comes from a time when painters, sculptors, performance artists and musicians threw away the rule books and explored the limits of their professions. But those days seemed to die with the materialist Eighties and the young conservatives emerging from art schools, particularly in Britain - once the most radical of art hothouses - are contributing few new ideas.

The revolution which spawned Hockney, Warhol and Durant seems to have lost some of its impetus.

Willis's work has a long tradition of expressing most dramatically real pain, anger, hurt and joy. He returned to Australia in 1981 after a period in New York to create the 12-movement "And The Leopard Looked Like Me" for the Adelaide Arts Festival and the Canberra Performance Festival. It involved live and bloody knife fights with co- performer, Richard Boulez as the leopard and Willis as trainer. Boulez was armed with a knife and Willis had a chair. Blood sprayed freely as the two tangled. 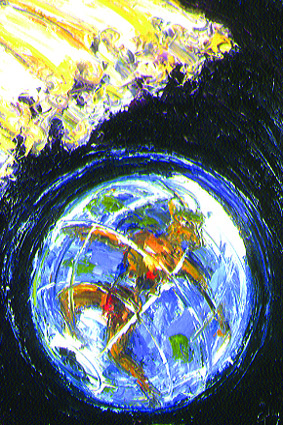 "Leopard" was the reconstruction of a long detailed dream, distilling the experiences of the time Willis had spent at the Chelsea Hotel, around the Andy Warhol clique, the Mudd Club, and the aggression of the city. It was certainly volatile. In another sequence Boulez whipped him into a frenzied running on the spot that ended with Willis, physically exhausted, collapsing to the floor. He rests to catch his breath and stands up, only for the scene to be repeated. And repeated.

It was an attempt to capture a particular intellectual moment and represent it publicly. His "Identification: specific" exhibitions in Amsterdam and London - his first in Europe since 1984 - are direct descendents of what Willis calls "giving a voice to the other" - representing an intellectual/emotional moment.

A significant visual work emerging from Willis's neo-pop NewYork period (1978-80) is "The Five Senses" suite in coloured electrical tape laminated into heavy plastic sheeting, in which Willis attempted to locate his essential experience of New York. The five - Feel Like Target, Tastes Like Goodbye, Sounds Like You Do, Looks Like It Is, Smells Like Success are dramatic.

Feel Like Target is appropriated from an image of Marilyn Monroe with her dress blown up over a subway grate,except Willis's model is bending over, but "between the hairs and holes you are looking down the barrel of a gun," says Willis.

Willis's innovation in "giving a voice to the other" is his concentration on understanding the interaction between the materials that create the work, the thought, the idea and the artist. It is essential rather than coincidental to say some-thing significant, and to find a new way of saying it. Content and form both have to be potent and radical.

Classically trained at the Canberra School of Art, Willis transfered to Melbourne's conceptual-oriented Phillip Institute. His work has ranged from murals for Fitzroy's avant garde cabaret 'The Flying Trapeze Cafe' to menu cover drawings for the Burdekin Hotel in Darlinghurst as well as video art for festivals in Tokyo, Paris, Munich and Sydney. His prize-winning works have been purchased by the Australian National University, and the Australian National Gallery, as well as state galleries and private collections across Australia and abroad.

The son of a Canberra butcher, Willis has lived in Sydney, Melbourne and at the Aboriginal settlement of Amoonguna nearAlice Springs. He has travelled widely, studying philosophy, anthropology and Buddhist culture and has taught art and computer graphics in Australia and the United Kingdom. In 1984 he was appointed Australia Council Artist in Residence at the British Council-funded Air Gallery in London.

Since his 1990 return to London, he has been endlessly concerned with the interplay of materials and subject: the varying thicknesses of the oil paint, the quality of the cloth surface, the use of palette knives, the brushes and the base material - the inner, vulnerable, protected self. Willis uses portraiture to practice the realism required for these more conceptual pictures and is rarely without a book and pencils, even for a quick tube ride into Central London to see a movie. He is a compulsive scribbler, but these most exacting and formal studies are never shown.

"I don't intend to disturb," Willis says, reflecting on the 50cm x 70cm unframed pieces strewn on the floor of his basement flat in the Boyd family's Highgate house, and on the small couch. Two recently completed works are drying on a line in the hall. "I push the image to a point of excitement in myself.

"I keep pushing it around until I get, in the moment of doing it, that feeling of 'Aha, now I'm getting it. Now it's heating up. Yes, ooh. Now it's hot and I keep pushing it until it gets that kind of an edge. It doesn't interest me unless I have got that connection with the image. It's not that they're totally outrageous... they're not outrageous, but they can be uncomfortable. They're not operating on a 'nice picture' level".

As the paint is applied, the images change repeatedly, shifting levels, sifting thoughts, before they begin to resolve themselves, rarely ending where they started. As the content develops, Willis searches for "a better understanding of the image required to represent the particular aspect of the human condition I'm experiencing at that time. And usually I am gunning for some sort of edge in myself".

His finished works are frequently, but not exclusively thick... and unframed are deceptively heavy. You can feel the weight of the paint on the paper. This new and specific image style is the beginning of a process, rather than its completion. Willis is still experimenting with subjects and materials and the works vary considerably intexture and concept, while retaining a clear stylistic consistency. They take a long time to grow on you, but they become compulsive.

Once seen and understood, a Gary Willis painting is recognizable. Some evoke responses easily. "Drifter" is neo-realist and easily accessible - a figure trudging along a shoreline. "Poet's last shot" captures a drunk hurling a glass across a room. Others are more difficult and understanding is improved with an explanation of the moment by the artist. They can be as instantly recognizable as they can be unfathomable, creating room for the debate on our ability to share common perceptions... to know what someone else knows, feel what they feel. In "A final glimpse of Eden" the glance - a schmear of white paint - from a woman he had barely met, is interpreted as having "enormous potential for the downfall of Eden". It was a moment we know and recognize in our own lives - someone seen stepping onto a departing train, requiring an instant, but momentous decision.

"I am painting what exists. It's a psychological landscape. I'm not making tasteful pictures. I'm representing the human condition and it is deeply subjective. The model is deeply flawed and not necessarily a good sample, but I'm the only model I've got." If he could bore into someone else's heart, mind and soul sufficiently to find a moment to represent, he would, but that's more difficult to arrange.

Willis's work is a development from the German Expressionists, the Cobra Group, the Angry Penguins and the painterly traditions of Arthur Boyd, Phillip Guston and George Bazelitz. Boyd, who frequently works thick oil into images with his fingers and hands, has been a major influence since 1971, when, as a promising art student, Willis was first introduced to Australia's leading painter. Similarly in this series, the image is created in conjunction with the way the paint works. 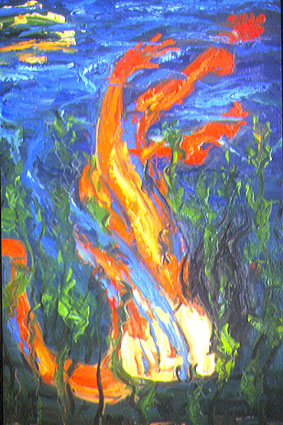 "They can take a long time to construct. The use of loose, wild painting is intended because I want it to be alive. I'm interested in the surface being alive and volatile - I'm trying to edge into new areas of language and part of my vocabulary is that I want the paint to be loose, the painting fluid, the paint thick, the surface painterly. I want them to be not just images but objects, so that you feel they are objects.

"I'm trying to make a picture which suits how I'm feeling at any moment in time. Those inner thoughts that we feel others would never understand - but sometimes share more closely than we can imagine - are real thoughts and everybody has them. It is the intuitive voice of the passionate other. The human condition is laden with these voices, rifled with these voices, but in the context of social protocol, you don't say what you think and you don't do what you'd like to do. And so as art, what I'm doing here is giving the condition of the other a voice.

"And it's not just the ideas, it's also got a lot to do with the technical side of getting the paint to work in just the right way. And not lose it because an important section has dried when I need the paint to remain pliable".

When you see a Gary Willis picture, it is not meant to besomething universal. It is a specific statement. But that does not exclude viewers identifying with the other voice that Willis presents.

"They really become icons of the notion of the other. That it exists. It gives space on your wall for the recognition of the other voice that we live with. That's how they function as art or that's their place as art. It's not a very conventional place".

Although Willis has been painting professionally for more than 20 years, the energy and intensity in both his own persona and the works he creates, makes it hard not to think of him as anything other than a "young artist", albeit an accomplished and experienced one.

In fact the term Young Artist is seen to refer increasingly to an art movement, rather than chronological age. That critical generation of the 1960s and 1970s when cultural life was radical and vital has given way to a new conservatism, unfortun-ately reflected among recent graduates unsure of a direction to take after the explosion of style which began in the second half of the 20th Century. Whilst waiting for the young conservatives to find their bearings, the new art is still to be found with the Young Artists Movement, where "struggling" and "angry" seem somewhat more appropriate adjectives.

In his first showing in Europe since 1984, Willis presents a distrubing series that asks serious questions about the relationships between images and thought, real life and self- percept-ion, as well as documenting in a most abstract conceptual sense, his experiences over the past year in the UK.

Many of these paintings are alive with a potency and excitement of a single moment captured in oil. They "stop" in the photographic sense, the action, preserving the moment of that inner or other voice. It's as if the pathway from Willis's thought to the paint and the surface was a camera with a very fast shutter speed, capturing in oil paint that intellectual action-shot.