"Harmful elements in the air, symbols clashing everywhere, junk floats on polluted water, an old custom to sell your daughter"
-"Hong Kong Garden" by Siouxsie and the Banshees

With fewer than 75 sunsets to go over the last pearl of Empire, Hong Kong is facing major changes in language, democracy, environmental controls and a raft of colonially- granted rights and freedoms. It seems that the threat of all- out mob warfare between corrupt units of the People's Liberation Army and the criminal Triads is too frightening to mention. 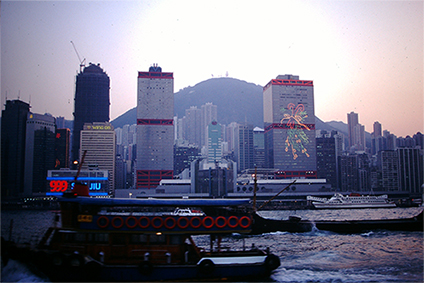 It becomes increasingly obvious in Hong Kong that everything is changing, as officials and tourism operators repeat the mantra that "nothing will change" and it will be "business as usual".

In the sense that Hong Kong is a development nightmare at the expense of its environment and citizen's health, the latter claim may well be true, but on the ground the changes are palpable.

At its most obvious, the tradition of young Brits coming to Hong Kong "to make a lot of money and get out", as many boast, will be restricted. The easy 12-month work visas of the past are being replaced by six month visas and only those who have seven years residency will be allowed to apply for permanency after Chinese takeover - or "reunification" as one government information officer politely corrected this writer. Expatriates are leaving in their thousands.

The aside that I wanted to be in Hong Kong to photograph the People's Liberation Army tanks rolling in, was met with hostile rebuttals from officials and those interested in continuing business under the new management. Several said it would "never" happen, just as the late Israeli Prime Minister Yitzhak Rabin once told this writer he would "never" talk to Yasser Arafat.

A fortnight ago, the Chinese authorities detailed the latest high tech weaponry that would be based in Hong Kong. Curiously, tanks were not on the list, but F-7 and F-8 fighter aircraft were, along with helicopters, speedboats and light armour.

But the presence of tanks will not be the defining moment of Hong Kong's handover. That happened in 1984 when then Prime Minister Margaret Thatcher sold the colony to Beijing, and like her other privatisations, sold it well below market value. (Hong Kong Island and southern Kowloon belonged to Britain in perpetuity. The remainder was leased from China.) The guarantees of freedom and democracy in the Joint Declaration are worthless.

Even Governor Chris Patten's ill-conceived Legislative Council - only one third of the 60 members are democratically elected and the others are representatives of industrial, professional or local communities - was described as a "provocation" by China, which replied with a 400-member selection committee to "elect" Mr Tung Chee-hwa, a billionaire shipping magnate, bailed out of troubled times with a multi-million pound loan from Beijing in 1985.

Claims that Hong Kong isn't ready for full democracy are hollow. Three democratically-elected members of the Legislative Council, Martin Lee, QC, Chrisitine Loh and Emily Lau are exemplary representatives and there are others of equal calibre.

So why didn't Governor Patten simply hold a proper democratic election? If China had challenged that, at least the attack on democracy would be obvious. Gov Patten's criticism of China for appointing its lackeys are lame. Even at this late stage he still has the legal authority to grant full democratic rights, as the colonial authorities should have done decades earlier.

It won't happen because everyone knows that China would react badly; but people who "know" China's reaction to that issue are the ones who also demand that no one can know what will happen beyond July 1. However there are some pointers.

Mandarin is displacing English as a second language and the English influence will wane. One Hong Kong Chinese environmentalist asked what will happen when all the gweiloh (white expatriates) leave? Many community organisations are staffed by do-gooding low-waged expats. Their Chinese counterparts tend to study computers and business rather than community and environment. The fear is that the lobbying of the relatively tolerant British colonial authorities will evaporate as activists (or dissidents) keep quiet after Beijing takes control.

A common view is that Beijing will treat Hong Kong as a remote colony, just like London did. It is but a rich speck on the bottom of a map of the People's Republic.

Officials objected to references to the civil service government of Hong Kong - answerable to Westminster - as "the colonial authority", but they were far more upset with the expression "third world", retorting with boasts of its wealth: the world's 8th largest trading nation, a per capita GDP estimated at US$25,300 for 1996, "second to Japan in Asia and higher than many western nations" (income disparities are hidden in the average) and US$57 billion in foreign reserves, the world's 7th largest. But it is this wealth which so shames the development and trade at-any-cost policies which have caused the extensive pollution and the failure to deliver the rights and freedoms of a "developed" nation.

The air quality in Hong Kong may be better than Bangkok, but that isn't saying much. Regional haze reduces visibility to a couple of miles, raw sewage has been pumped into the sea (treatment works are belatedly being introduced) along with industrial waste. Mountains are levelled for landfill, historic buildings are replaced by skyscrapers. There are few rules.

While the United States cracks down on Chinese intellectual property piracy, everything is available in Hong Kong. It is curious that US authorities haven't taken a closer look at the British colony.

There is little reason to expect environmental quality improvements under the new regime, despite some activists saying it couldn't be worse than under the British. Poorly maintained ships contribute to air and water pollution, along with road transport emissions and it is difficult to imagine Chief Executive-select, Tung Chee-hwa, legislating against his fellow transport moguls. His most significant environment statement was that he wants to "review" the polluter pays principle.

But the greatest concerns are for human rights. Former Guardian editor, Peter Preston, has written that a free media is the key to ensuring those rights in Hong Kong, a hope already crushed like a Tiananmen Square demonstration. (No one killed not many injured, according to Beijing)

Hong Kong cable television head, Mr Robert Chua, announced that his company "had no plans to... cover anti-China demonstrations" during the handover, so as not to upset Beijing.

The corporates and institutions buying space in the supplement divided into two groups:

those who named Tung - including the Bank of China, Hong Kong Shipowners Association, City University (Tung is on the board), Chase Manhattan Bank and the Stock Exchange of Hong Kong (shares in Tung's companies rose by Pounds 20 million on his appointment);

and those who had a bet each way in case Tung didn't win the selection - including Standard Chartered, Canadian Eastern Finance and the Hutchison Group.

It does not auger well for press freedom that Mr Rupert Murdoch has joined with the Chinese Communist Party-owned People's Daily to capitalise on Communism. It is possible that the relationship might be known to his employees on other publications reporting on the region and Beijing has made it clear that it is underwhelmed by criticism.

Much more disturbingly, the head of the Independent Commission Against Corruption, Michael Leung Man-kin, was the first senior civil servant to not have his term extended beyond June 30. Was Mr Leung not doing his job well enough? Or was he doing it too well?

But perhaps the greatest threat to law and order is the looming confrontation between the notorious Triad gangs and the PLA. Several decades ago the Triads came under control of Chiang Kai-shek's Kuomintang nationalists and are well- entrenched in Hong Kong.

On July 1, the PLA becomes the law and order authority in the colony. How will it deal with Triad corruption and violence? Will there be running gun battles, where today officers in their British Police uniforms keep the peace with merely a baton and well-coordinated response teams?

It is hard to understand why the PLA would not want to crush a traditional foe, nor why China wouldn't want to establish overall authority. The PLA has already won a reputation for endemic corruption. Will it not want its share of the Hong Kong cake? And how will families dependent on decades of Triad extortion for their income react when their livelihood is taken by the new masters of the colony? A gang warfare with the added spice of ideological enmity doesn't auger well for law and order, peace and security.

How long will Jardines, who profited hansomely from the opium trade and have moved headquarters to the Bahamas as a mark of faith in the new Government (Reuters has moved to Singapore), be allowed to fire the famous "noonday gun"?

Will China really bow to the demands of tourists?

An Australian vice-president of Amnesty International, Ms Kath McKay, who was in Beijing for the1995 United Nations Fourth World Conference on Women said there were concerns ranging from imprisonment of religious worshippers and treatment of minorities, to forced abortion and sterilisation of women and China's policy of execution.

"A lot of things are good for women in the metropolitan areas, including health, housing and access to education and employment, but these are not universal," Ms McKay said.

"The concerns are over female infanticide, forced sterilization and abortion and the traffiking of women and Amnesty is concerned for freedom of expression in China as well as freedom of movement and the treatment of dissidents.

"China has not only the world's worst record for execution, the way it is done is enormously cruel and barbaric, parading people around the streets and then allowing a trade in body parts from the deceased," Ms McKay said.

Among the crimes that are considered death penalty offences in the People's Republic of China are economic crimes, including tax fraud and currency speculation.

It could get tricky for some companies operating and investing (or speculating) in Hong Kong.