First Published in The Australian, 2001


Written mere days after the September 11 terrorist attacks, David Langsam reports on how CNN and the spooks got the wrong man, and how bureaucracy hindered any civillian help.

Last Thursday my post-graduate class was clearly more focussed on events in New York and Washington than informatics and communication in Melbourne.

So the tutorial on "management communication in the information industry" examined the news flow following the terrible events of Tuesday.

"Ah!" we thought, with relief, "They know who did it."  A response probably universal when the story made the global media front pages - including The Age - courtesy of CNN.

The names were interesting. I asked my Turkish students if they could be from their country. "Afghan or Arabic," came a quick reply.

I typed "Ameer Bukhari" into the Google.com search engine and was surprised to find an instant hit. Did he have a terror website?

According to an on-line section of the Cincinnati Enquirer, Ameer Bukhari, a Saudi national from Vero Beach Florida, had taken flying lessons just like the FBI/CNN hijacker. But the Enquirer report - dated a year earlier - said he had died in a mid-air collision, making it a bit tricky for him to have flown a Boeing 767 into the World Trade Centre as alleged by security sources, and through CNN, the world's media.

I wrote to CNN urging whoever read the email to take it to a news editor. But CNN does not provide a simple "contact us" email system. The most appropriate link was "comments". I hoped someone might read the email.

That night, CNN was still running the story on the internet and via the Channel 7 coverage. CNN's newsroom does not accept calls from the public before 8am, not even from journalists in emergencies. I had several conversations with CNN receptionists who wouldn't put me through before 8am (10pm EST). At 8.30am, I was given the public relations answering machine. The Age has someone on duty 24 hours a day who decides whether the call is worth following-up.

A New York friend contacted the US security services on my behalf to let them know the problem with their claim.

The Washington Post said I should call after 9am their time. When I did, was told to try again after 9.30.

A Cincinnati Enquirer deputy editor transferred me to assistant managing editor Rick Green, whose recorded message said his mail box was full. She was too busy to talk when I called back.

I gave up on the US media and rang ABC Radio's John Highfield at home, to recount this bizarre story.

The AM program taped an interview which would be displaced by Ansett and I gave up and went to bed. But Highfield told the story to 2BL so at least it was on the public record somwhere. He also called ABC Washington and John Shovelin started asking questions.

By 6am on Friday - too late for the world's media relying on CNN's coverage - CNN had subtly changed its story. No apology to the Bukhari family, just a deletion of photographs and a statement that Ameer Bukhari had died a year earlier. A day after I first emailed, CNN apologised, not to the Bukhari family, but for the misinformation "based on information from multiple law enforcement agencies".

By that time, the Bukhari name and nationality had fuelled speculation that Saudi terrorist Osama bin Laden was the perpetrator. But if "multiple law enforcement agencies" can be so wrong, what does that tell us about the investigation? 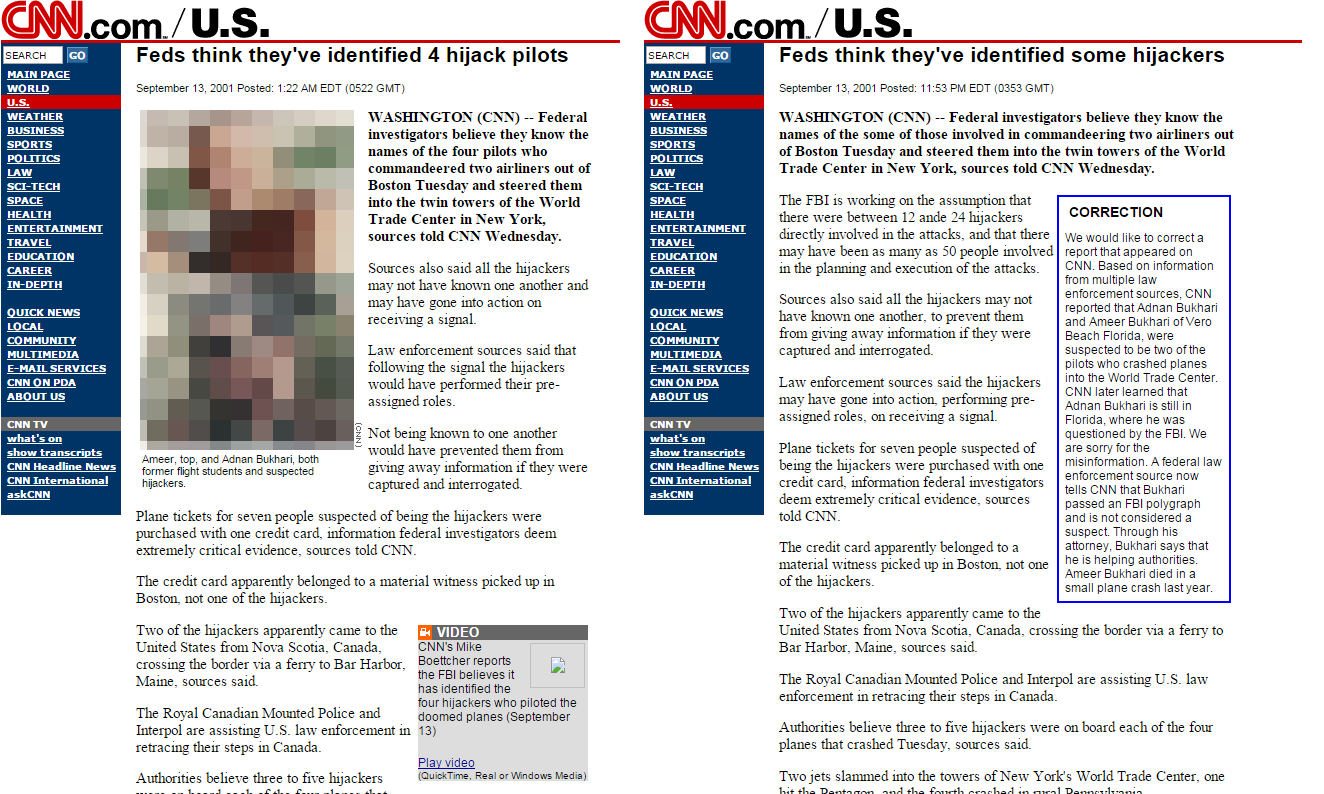 Is it a predetermined search for a known suspect or will it be a serious (and perhaps slower) investigation?

Mr bin Laden may well be our culprit, but could we have some evidence before the trial and execution? If he isn't behind it, then someone else is.

Given that two minutes on line in Melbourne can defy the world's best intelligence services and a respected media outlet, perhaps we might pause when we are told we are going to war, but we don't know where. (Avoid hospitals and Chinese embassies.)

A serious investigation is open-minded, asks difficult questions and does not jump to conclusions.

Was it not strange that neat bags of personal belongings were easily found in rental cars? How have they identified the other hijackers in a country where air tickets are as common as bus tickets? Do not the FBI and CNN have name identification systems as sophisticated as Google.com?

Or are they in such a hurry for vengeance, that justice and democracy - for which President Bush claims the thousands of civilians have died - are surplus to requirements?

The amended article can be found here.
- note that the headline has been changed, a (vague) correction has been issued, and the images are no longer on the page.

Post Script: While writing this piece on Friday 14 September I was called by a young woman identifying herself as an officer of the Australian Federal Police. She said she had been contacted by the FBI and wanted to know how I knew this information.

I asked her if she had a computer screen up. She didn't, but lit up her system. I asked if she knew the Google search engine. When she said she didn't, she only had experience with AltaVista, I again had confirmed why "Australian intelligence" is an oxymoron.

I talked her through the search I had done with my students and - bingo! - up came the story in the same place in the search results. She asked a couple of other questions and seemed satisfied that I was an investigative journalist on the side of the angels rather than a Melbourne cell of Al Qaeda.