Hong Kong has been plundered for 150 years by the British and from July 1 it is China's turn. The cost of the rampant free-enterprise has been borne by the well-being - or not - of flora, fauna and human health.

The air is near unbreathable on Hong Kong Island, the whole territory is cloaked in a pall of regional haze, there are no planning regulations and no controls on vehicle pollution. Sewage and all manner of industrial waste chemicals are pumped into the waters surrounding the British Colony.

The famous White Dolphins are far less commonly sighted than they once were partly because whole mountains are ripped down for land reclamation, for offices and apartment blocks, first destroying terrestrial environments in order to then destroy marine environments.

Environmentalists in the British colony fear that Beijing will treat its new Special Administrative Region in precisely the same way as Britain has treated its colony - a small speck at the bottom right of the map spinning great revenues, subsidised by the environment. The only hope is that China might place environmental values higher than the outgoing masters have.

"It can't be worse under the Chinese than under the British," said several environmentalists.

"Anything that you could possibly do to harm a dolphin, we do it here in Hong Kong," says marine biologist Lindsay Porter of the Swire Institute of Marine Science. The raw sewage and chemical wastes pumped into the seas, along with over-fishing and vast shipping traffic are among life's challenges for the famous White Dolphins (sousa chinensis) - ironically, the emblem for the takeover.

"If the fishermen with their high tech trawling and sonar equipment can't find fish, then neither can dolphins," Ms Porter said.

"What will happen when the gweiloh [European expatriates] go?" exclaimed a leading Hong Kong Chinese environmentalist, referring to the majority of staff at Friends of the Earth and World Wide Fund for Nature in Hong Kong.

Instead of protecting the important internationally-listed Mai Po wetlands on the border with the People's Republic of China, proposals for the development of a golf course and several massive apartment blocks are being considered. Development proposals are rarely rejected. Historic buildings like the Hong Kong Club in Central Hong Kong are ripped down for more profitable skyscrapers.

An estimated 150 immigrants arrive from China each day - 55,000 a year - requiring accommodation and the pressure for "reclaiming" land is immense.

Nevertheless, a stunning array of butterfly and bird life survives, most notably the large kites hovering over the islands and the skyscrapers of Central, looking for something to scavenge. An Australian doctor on a tour of the Mai Po wetlands recorded 47 different bird species in five hours. 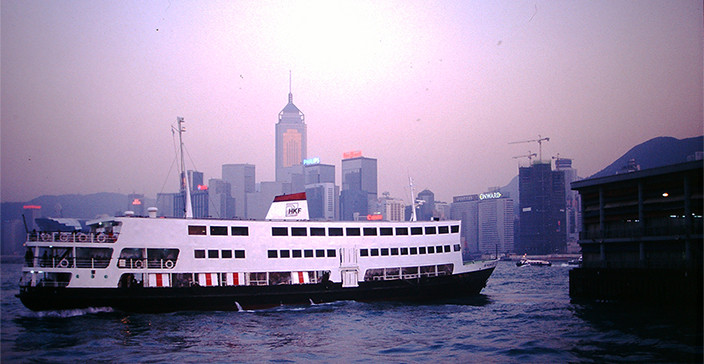 But Dr Ng Cho Nam, who led the birdwatchers' group and is the chairman of the Hong Kong Conservancy Association, said that rather than reflecting any good environmental health in Hong Kong, many of the birds were refugees from even worse conditions across the border. The Australian doctor said he generally records about 100 species per excursion in Australia.

Across the wetlands, through the thick, polluted air, Chinese development looms large. A fisherman can be seen illegally operating on the Chinese side of the no man's land/Ramsar-site. Shooting expeditions have taken place on the Chinese side of the wetlands, leading to questions of the nature of people allowed to have guns and travel so freely in a border region of the People's Republic of China.

Listening to the colonial authorities, one would think that no-one was to blame for the tragic state of Hong Kong's environmental health. The deputy director of Environment, Anthony Cooper says he has tried to do the right thing, but the Legislative Council - a partially-elected chamber - has prevented important changes being introduced.

Blaming the Legislative Council is an interesting response. The Civil Service is the government of Hong Kong - answerable to London - and has had 150 years in power. It only recently addressed the issue of pumping raw sewage into the sea and while the reform program is admirable, it is somewhat late.

But the failure to deal with air pollution - blamed on the Legislative Council - is reprehensible. While much of Hong Kong's marine pollution is now coming down the Pearl River Estuary from China, Hong Kong has made it's own sizeable contribution to the heavy metals, chemicals and general garbage that constitute too much of the South China Sea.

The Legislative Council was created by the ruling authority, the United Kingdom, and failing the environment is just a symptom of an inherent design fault.

Of the 60 Legislative Council members, only 20 were what could be called democratically-elected and the rest are elected to protect and defend their local, professional or industrial interests. Pressure to protect the environment comes primarily from independent and Democratic Party members who will not be represented in the incoming Provisional Legislature, appointed by Beijing.

There are no regulations demanding environmental impact assessments for major projects. Two islands, The Brothers, lying between the new airport on Lantau Island and Kowloon, were destroyed for landfill, under the claim that the small islands were in the road of the airport several kilometres away. It was ludicrous given the condition of the existing airport. A senior Environment Department civil servant said he didn't know any better, when accepting the story that the islands would interfere with the radar systems.

A 300 foot high mountain on Crown Land on Lamma Island south-west of Hong Kong Island has been mined for a cement works. The south face of the mountain was removed prior to my visit to the island, but the top came off in the few weeks that I was there. The civil servant said there was no need for permission from his department to remove the mountain, rather it would come from the quarries section of the Civil Engineering Department.

"Hopefully next year," he said when asked about the time frame for the introduction of environmental regulation. In the meantime, the mountain will have more of its crown removed for landfill or cement works, this time claiming that it is imperative to destroy more of the mountain so that it can be restored. Apparently the cement works has cut into the mountain so steeply that it cannot be saved. The newly mined material will pay for the re-afforestation programme, we are told.

The tragic plunder of Hong Kong's environment, as a forgotten consequence of development at any cost, can be quite disturbing to witness. And the mixed views on the future of Hong Kong after the Chinese take-over or "reunification" - are reflected in environmental concerns.

The thought that it "couldn't possibly be worse under the Chinese than it has been under the British" and that 1997 could be the saving grace for Hong Kong's environment, may need to be reviewed in the light of concerns over freedom of expression. China has already announced it will roll back human rights in Hong Kong and has long made it clear that it is not impressed with rowdy - or even very peaceful - demonstrations.

"To have an effective environment movement we need a credible free press, so that if the environment is damaged, people will know and be able to see and voice their concerns," says Dr Ng Cho Nam.

"Without a free press, people will not know and they cannot complain if they see things go wrong."

Sadly, Hong Kong's media are already cowering to Beijing and Reuters has left for the relative freedom of Singapore, claiming that it was an administrative decision and had nothing to do with threats to media independence under Chinese rule.

But Dr Ng, an associate professor of environmental physics at City University Hong Kong, has visited Beijing several times and is proud of his good contacts with the government of the People's Republic of China. He believes some good can be achieved through quiet diplomacy, but is also aware that Hong Kong is a physically tiny part of the Chinese map and that Beijing's interest is in its economy rather than ecology.

The newly-appointed Chief Executive, shipping magnate, Tung Chee-hwa, is unlikely to place any burdens on his fellow ship owners, who are responsible for much of Hong Kong's air and marine pollution.

In one of his rare mentions of the environment, Mr Tung has said he wants to "review" the polluter-pays principle. Not an auspicious start.

And it is not as if the colony cannot afford tough environmental measures. Hong Kong is not poor. With $US57 billion in foreign reserves, it is amazingly rich.

Christine Loh, one of the 20 democratically-elected members of the outgoing Legislative Council says that GDP figures are what make governments look good. She says it is "amazing that such a rich place is only doing sewerage now".

Asked what will happen to the environment after July 1, Ms Loh noted a 564 percent increase in container terminal capacity and said expanding ports meant more diesels and barges and as a consequence more noise and air pollution.

She expects post-1997 Hong Kong will be infrastructure-focussed with little concern for humans.

If the present colonial authority merely imposed the (flawed and much criticised) environmental standards existing in Britain today, Hong Kong would be improved a thousand-fold. There is still time, but anything done now, like Governor Patten's very flawed Legislative Council, will merely be seen as a further provocation to China.