War in the Woods


Otways readies for 'war' on the Wild Dog Creek ridge.

A broad alliance of residents, businesspeople, Aborigines, farmers, "ferals" and environmentalists in Apollo Bay on Victoria's Great Ocean Road have joined forces against a local logging company, the State Government and the multinational tissue-paper manufacturer Kimberly-Clark over plans to log 4kms of state forest in one of Victoria's major tourism destinations.

The central claims are that logging causes erosion and landslides, pollutes the town's water supply, make the forest susceptible to invasion by diseases, threatening biodiversity and that logged areas are unsightly and deter valuable tourism. Kimberly-Clark and the Victorian government deny any wrongdoing.

The target of the proposed logging is the Wild Dog Creek Ridge, overlooking Apollo Bay township facing south to Antarctica, one of the southernmost points of the Australian mainland.

Farmers in the Apollo Bay Landcare Group, "ferals" and conservationists in the Otway Regional Environment Network and the Apollo Bay Chamber of Commerce are organising their strategy over winter, when the loggers can't work in the forest and have begun a boycott campaign against Kimberly-Clark products such as Kleenex tissues.

Fourteen protestors were arrested February 3 and charged with hindering forestry operations. They are due to appear in Colac Magistrates Court on May 5.

But according to Apollo Bay Landcare Group spokesman, Roger Hardley, the arrests are nothing compared to what will happen if the logging companies don't change their plans. He says the State government has approved logging operations that breech its own principles and guidelines.

Mr Hardley supplied The Republican with a Landcare Group document tendered to the Victorian Minister for Natural Resources and Environment, Ms Marie Tehan, from Mr Dennis Williamson, who was employed by the State Government from 1977 to 1984 to establish the Victoria's visual management system for natural and rural landscapes. 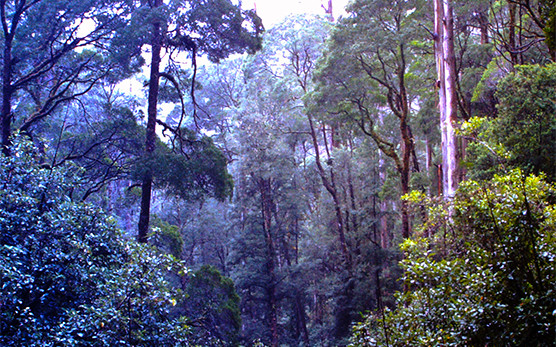 Mr Williamson says "serious errors exist" in the Department's assessment of the area to be logged and that the type of logging operations proposed "will not satisfy DNRE's own Visual Quality Objectives."

It concludes: "Given high local resident concerns and tourism values in the area, the proposed timber harvests are of very serious concern and should receive further review before operations proceed, with the result that such operations may be significantly modified or halted altogether," Williamson concludes.

The official Victorian State government response to The Republican's inquiry was "No comment."

Sceptical of gaining a favorable hearing with the Department, which is said to be more concerned for the estimated $4million in logging royalties than the Otways $90 million tourism industry, local residents have begun action against paper manufacturer Kimberly-Clarke.

Kimberly-Clark has taken full-page advertisements in local newspapers to make the case for logging. The company denies that Otways logging is primarily for its benefit, while admitting that it is the single largest customer, by volume if not by value. A company spokesperson said his company would be out of the Otways by 2000.

And the advertisements themselves have become part of the controversy OREN spokesperson Mr Simon Birrell says the advertisement is "misleading" with the company sourcing its product from clear-felling coupes where "every tree is taken".

The boycott of Kimberly-Clark products has begun under the slogan "Don't wipe your bum on the Otways Native Forest."

See the follow-up stories: Ready for War and Poisoned Water