Firing Up On Climate Change 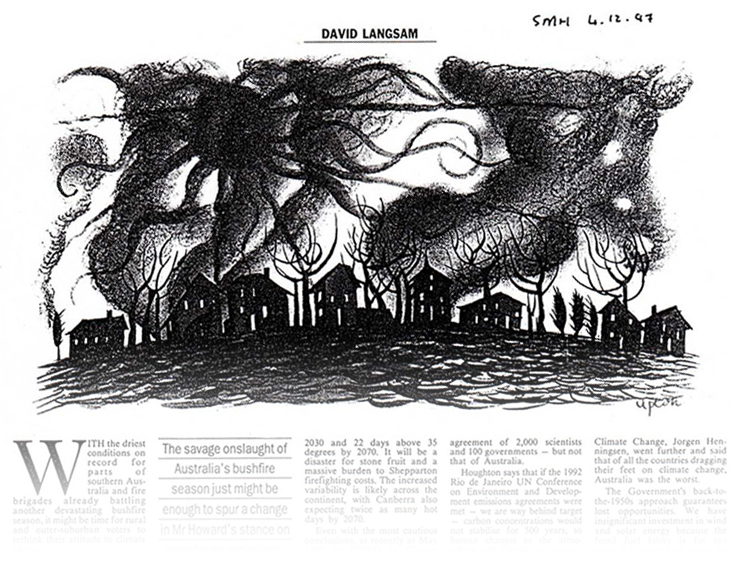 The savage onslaught of Australia's bushfire season just might be enough to spur a change in Mr Howard's stance on greenhouse emissions.

With the driest conditions on record for parts of southern Australia and fire brigades preparing for battle against another devastating bushfire season, it might be time for rural and outer suburban voters to rethink their attitude to climate change.

Despite the Federal Government's denial of the internationally agreed science, the Australian Bureau of Agricultural and Resource Economics' dodgy figures laughed at by our global partners, and the recalcitrance of the Prime Minister on behalf of the fossil fuel lobby, the Government continues to fund important research on measures to counteract the impact of the climate change it denies.

The Commonwealth Scientific and Industrial Research Organisation continues to search for crops that will survive increased insect infestation and other climate change impacts. But what might help the Coalition Government pay attention to its farming constituency and marginal seat voters - ahead of the coal and oil industries - is the threat of bushfires, with an expected doubling of bushfire days in much of south eastern Australia over the next few decades.

Ash Wednesday in February 1983 claimed 76 lives in Victoria and South Australia. In 1967, 62 people died in fires in and around Hobart. The Insurance Council of Australia says the material cost of major bushfires in the past 30 years is about $700 million in current values. The insurance loss in the 1994 New South Wales bushfires was $56 million and Ash Wednesday cost $320 million.

While the figures account for the damage to buildings, they do not include the cost of the lives of the firefighters and civilians killed in the fires. Nor does Mr Howard's claimed cost of responding to climate change include the loss of work time for volunteer firefighters, the cost to industry of lost production, nor the financial benefits to Australia from being ahead of the world on emissions reduction and new technology rather than lagging a decade behind our competitors.

But before the fossil fuel lobby begins its disinformation that Australia always has had bushfires and there is no alternative to oil, two facts should be noted:

2. "Australian forest fires become impossible to control when the temperature reaches about 35°C, the relative humidity falls below 20 percent and the winds are in the range of 10-18metres/sec [36- 65 kph or 20-35 knots]." (Bureau of Meteorology, Victoria)

The rise in days over 35°C means fire services will be increasingly in demand, while some State governments - like Victoria - attempt to wind back budgets or, worse, privatize the services, and the Federal Government goes into deep denial over the effect of polluting our atmosphere.

From an average of nine days over 35°C in Tatura (Victoria) at the present time, the Goulburn Valley fruit-growing town can expect 12 hot days a year by 2030 and 22 days over 35°C by 2070. It will be a disaster for stone fruit and a massive burden to Shepparton fire fighting costs. The increased variability is likely across the continent with Canberra also expecting twice as many hot days by 2070.

Even with the most cautious conclusions, as recently as May 1997, the CSIRO described deaths from bushfires as "an increasing trend".

"The southeast coastal strip of Australia is amongst the most fire prone in the world," said the CSIRO's Atmospheric Research Division. Despite the complexity of mapping climate projections onto the conditions for bushfires, the CSIRO is in no doubt that "the fire danger is likely to increase if the climate warms".

New South Wales Fire Brigade spokesman, John Hoban, says that with the Carr Government's "quantum leap" investment in the fire services, they are ready for a harsh bushfire season, likely after the long dry year.

"We're probably the best equipped and trained we've ever been," Hoban said, but noted the fires in Indonesia and the first drought in the New Guinea highlands in living memory and asked: "Who knows what's in store for us?"

"Weather and fire are unhappy partners. We look to guidance from the CSIRO and Bureau of Meteorology and listen to what the experts tell us. We've just got to get the job done," Hoban said.

The chairman of the British Royal Commission on Environmental Pollution and co-chair of the Intergovernmental Panel on Climate Change (IPCC), Sir John Houghton, (former head of the UK Meteorological Office) has won the agreement of 2,000 scientists and 100 governments - except Australia.

Houghton says that if the 1992 Rio de Janeiro United Nations Conference on Environment and Development emissions agreements were met - we are way behind target - carbon concentrations would not stabilise for 500 years, so human changes to the atmosphere and climate are guaranteed for a long time to come.

The IPCC's work has been assessed by the most learned bodies in the world including the Royal Institute of International Affairs in London. In the most recent RIIA briefing paper on climate change, Duncan Brack (International Economics) and Michael Grubb (Energy and Environment) describe naysaying - denying that there is a problem - as "both irresponsible and doomed as a political strategy."

"Climate change will happen," wrote Brack and Grubb. "Now that the IPCC has completed the largest ever international assessment exercise, no-one who chooses to ignore its conclusions and implications can claim not to have been forewarned."

Instead of just denying the evidence, the Coalition Government has changed tack, now claiming that Australia is a special case. As far as the European Union is concerned, the only special case is that like their travel allowances, the Australian Government's (ABARE) figures don't add up. Mr Howard's October speech to the Australian Chamber of Manufactures was circulated and ridiculed at the European Commission, with officials saying their Australian counterparts, who had made a positive contribution until March 1996, appeared confused and unprepared.

The Head of the European Commission's Delegation on Climate Change, Jorgen Henningsen, went further and said that of all the countries dragging their feet on climate change, Australia was the worst.

Claims that Australia contributes little to climate change are nonsense. Mr Howard's own speech proves the lie: "Australia accounts for only 1.4 percent of global emissions". Significantly, he failed to mention that with 0.36 percent of global population, Australia pollutes at five times the world average.

The Government's back-to-the-1950s approach guarantees lost opportunities. We have insignificant investment in wind and solar energy, because the fossil fuel lobby is far too powerful. Instead of using the environment and taxpayers to subsidise coal and oil, we should be developing next generation technology for export to our Asian neighbours. If we don't, others will.

How is it that the European Union produces 3,400Megawatts of wind power, India 820MW and Australia 2.5MW? Worse, the sunburnt country produces less than 2.0 MW of solar power and according to Environment Minister Senator Robert Hill - directly contradicting his leader - we are among the world's worst polluters, much of it motor vehicle greenhouse gasses.

The cost of Australasia doing nothing has been estimated at 3.8 percent of GDP by the Netherlands-based Institute for Environmental Studies. The financial benefits from developing renewable power technologies are endless, and that is apart from the reduction in climate change, the consequent bushfires and other agricultural impacts.

Perhaps after the next Ash Wednesday, when thousands of Australians are again homeless and scores of civilians and firefighters are dead, we shall again hear the Prime Minister claiming it was unavoidable, or perhaps like climate change, it isn't really happening. Instead he might listen to the experts and just get the job done.

See the follow up to this story, written five years late: Out of the Frying Pan