Message On Climate Change Over Heads Of Decision Makers


With dramatic climate and industrial change in the air, DAVID LANGSAM says we do need a weatherman to know which way the wind blows.

Arguably the world's most authoritative speaker on climate change, Sir John Houghton, has been addressing standing-room only audiences in a most under-publicized but critically important Australia tour, detailing the science behind the demand for industry to begin a badly-delayed global change of direction.

While his audience at the Melbourne Bureau of Meteorology last week included a sympathetic Howard Government junior minister, Senator Ian Campbell, and prominent policy makers, Houghton's urgent message has been missed by too many decisionmakers.

In fact the new Coalition government is either ignorant of, or directly opposed to, the necessary changes to send Australian industries down the profitable path of environmental responsibility. (The contrast of Labor's former Environment Minister Barry Jones sitting next to former Treasury Secretary and National Party Senator John Stone could not have been greater.)

Houghton, the chairman of the British Royal Commission on Environmental Pollution, a co-chair of the Intergovernmental Panel on Climate Change (IGCC), former director general of the UK Meteorological Office and former vice-president of the World Meteorological Organisation, says that if all the 1992 Rio de Janeiro United Nations Conference on Environment and Development agreements on emissions are met (we are way behind target), carbon concentrations do not stabilize for 500 years.

We are still pumping so much pollution into the atmosphere - primarily carbon from power plants and motor vehicles - that heat that should escape from the planet is trapped, warming the Earth like the glass on a greenhouse. 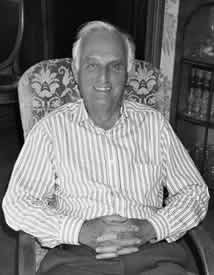 At current rates the amount of carbon dioxide in the atmosphere will double by 2050, increasing temperatures by about 2.5oC - which can be compared to the 5-6oC change between warm periods and ice ages. The change since pre-industrial times has been greater than at any other time in the past 10,000 years.

The seas are expanding, both from the general warming and melting glaciers and will continue to rise even if emissions stabilize.

That threatens not only six million coastal dwelling Bangladeshis but St Kilda, Bondi, Cairns and Perth. We might get a better government response when Canberra is coastal.

With consequent rainfall changes, marginal crop regions will vanish while others increase yield, but face flooding.

The answer should be the Rio de Janeiro agreement to cap emissions at 1990 levels by the year 2000, but that is unlikely while companies like Eastern Electricity (privatized SECV) say Australians don't use enough power for Eastern's very short term corporate profits.

Houghton quotes the World Energy Council saying the technology is available to achieve reductions - more efficient energy use can give an immediate cost- effective 30 - 40 percent savings - but "energy is so cheap that nobody has a real incentive to get on with it," Houghton said.

The impetus needs to come from a forward-looking Government aware of the economic opportunities in driving market-leading technological change. Environmental leadership is profitable.

Fagan said Siemens carried losses on its photovoltaic panels because when fossil fuel prices rise, solar energy will become competitive and Siemens will be the market leader.

Management Information Services Inc estimated the 1992 US expenditure on environment at $US170 billion and growing three times faster than the economy, providing 25 percent of GDP growth in that year. Environment industries are expected to create 5 million jobs and equal U.S. Defense Department spending by 2000.

UK environmental expenditure was Sterling 14 billion ($A30 billion approx) in 1990, 2.5 percent GDP and in line with the European Union average.

The heart of the problem is the low cost of non-renewable fuel, which former European Union environment commissioner, Ionnis Paleokrassas, described as an environmental subsidy to the energy industry. Include environmental costs and the alternatives suddenly become competitive.

It was on the subject of financial instruments, tradeable permits and taxes, that I thought John Stone might have some interesting views. He did. But then he said they were "off the record".

"No" was a repetitive theme.

It highlighted Australian government and industry choices: engagement in technological change welcoming incentives to pioneer new systems; or a disbelieving rearguard, resplendent in self-serving catechisms of time aplenty and ignoring the global climatic and business environment.

And John Houghton, tirelessly, diplomatically, underlining the universality of the line-by-line agreement on the science of climate change, the causes and impacts, by representatives of more than 100 nations and gently advising that we must deal with changes which, ultimately, affect Australia's crop yield and economy.

A series of carrot and stick financial instruments and other measures are required to penalise polluters and energy wastage and reward cleaner technologies.

In the US tradeable sulphur permits allows good performers to sell the balance of their emissions to bad performers who have to pay to pollute, rewarding cleaner companies. Similar systems can operate for air and water quality and waste reduction.

For governments with a micron of spinal column, a carbon tax is a positive incentive to new and existing industries; raises revenue; ensures that polluters pay; and wins green votes all in one package. But if Keating couldn't, how can Howard?

Australia has sunshine, open space and a great deal of potential for alternative energy. There is no reason for Australia to be an ignorant polluter, when we could be leading the way with Germany, Scandinavia and California.

Senator Campbell pleased the meteorologists saying he would defend the Bureau to Cabinet colleagues and that the World Meteorological Organization was "doing good for mankind and had the support of the Coalition."

But the sad truth is that his government is more likely to privatize the Bureau than get serious about reducing greenhouse gas emissions. Perhaps when Canberra is coastal.