First Published in The Financial Review, 2016 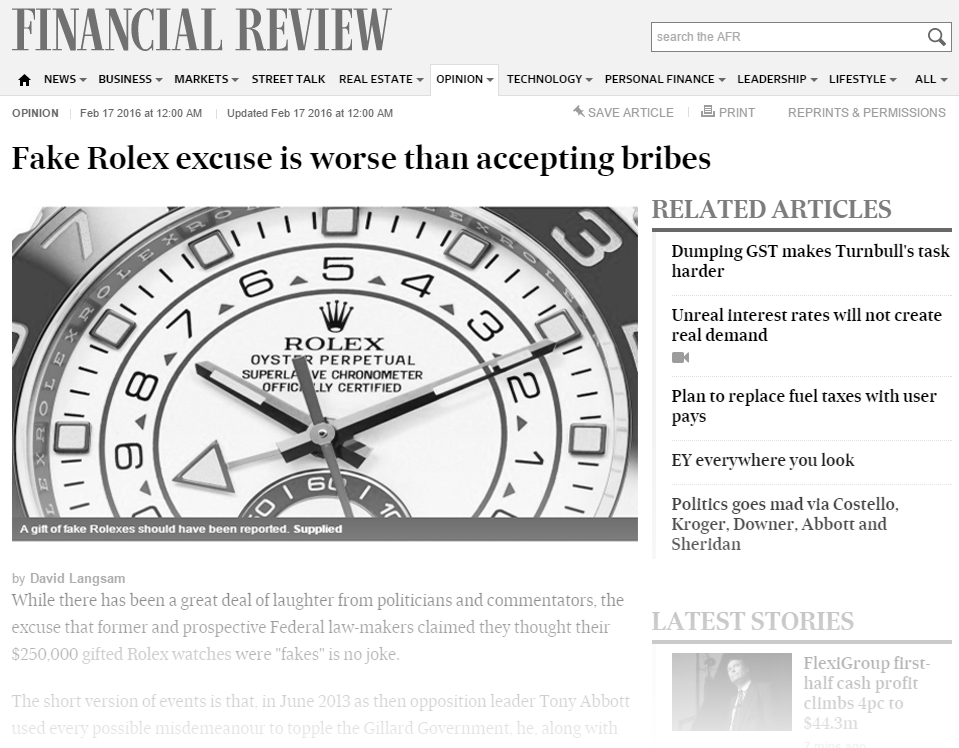 While there has been a great deal of laughter from politicians and commentators, the excuse that former and prospective Federal law-makers claimed they thought their $250,000 gifted Rolex watches were "fakes" is no joke.

The short version of events is that, in June 2013 as then Opposition Leader, Tony Abbott used every possible misdemeanour to topple the Gillard Government, and he, along with former Industry Minister Ian Macfarlane and Stuart Robert were given watches Chinese businessman Li Ruipeng, at an event in Canberra. They were also given watches for Margaret Abbott and Chantelle Robert, with then Queensland minister Rob Molhoek receiving a Cartier watch.

According to reports "Macfarlane, assuming his Rolex was a fake worth between $300 and $500, declared the gift with the clerk of the House of Representatives but kept it - and "wore it occasionally".

Eventually Mr Macfarlane had the watch valued at about $40,000 and returned it to Mr Li's company and the Australian Financial Review reported that Liberal Party official Tony Nutt ordered the watches collected to be returned.

Mr Macfarlane was a Minister in the former Howard Government for six years, and the man who would be Prime Minister, Tony Abbott, was a 19-year veteran of Parliament, including six years as Leader of the House.

The excuse that they thought they had been given - and kept - illegal goods in breach of the Australian Trade Mark Act, not to mention international agreements, is simply reprehensible.

It is worse than undervaluing the watches or forgetting to register them.

And how did Mr Li manage to bring more than $250,000 of watches through Customs?

According to the Federal Government's IP Australia (formerly the Australian Patent Office), Under the Trade Marks Act 1995, it is an offence to:

According to the Department of Immigration and Border Protection: "If you are aged 18 years or over you can bring up to $900 worth of general goods into Australia duty-free" as well as up to, 50 cigarettes and 2.25 litres of alcoholic beverages. "Business travellers carrying commercial goods or samples may need to obtain permits for their goods depending on the nature of the goods, regardless of value. A customs entry may be required if the goods carried are valued over $1000."

But it is not just the breaking of the law that is reprehensible. It is the message that the trio collectively send to the community that it is okay to possess either cheap or expensive counterfeit goods.

What value the China-Australia free trade agreements if China will continue counterfeiting Australian drugs and other inventions? Indeed what is the point of having any intellectual property laws if the chief law-makers of the Party of Business, as they like to call themselves, flout the laws so brazenly?

Don't worry about buying cheap software in Thailand badged as Microsoft or Apple. Just bring it to Australia where illegal and counterfeit copies are welcome.

Concerned that Rupert Murdoch might miss a few pennies by downloading Game of Thrones or Breaking Bad from Piratebay? Not an issue. The Prime Minister and Minister Responsible for Intellectual Property think it's very funny and so do the media.

When the police knock on your Bikie Gang hardened steel door to question your unemployment benefits, just say: "The Maserati in the driveway? It came in a plastic bag - I thought it was a fake." It's bound to work.

But for those of us who rely on intellectual property protection: journalists, authors, songwriters, researchers, universities, biotechnology and pharmaceutical companies, designers, architects, car companies if we had any left, and a world of other innovators, protecting our inventions is all we have.

You can't just go and copy my work because you like it. It's how I feed my children.

It might be funny to rip-off the most ripped-off rip-off, Rolex watches, whose marketing far exceeds their value compared to better watches, but the principle of a Minister of the Crown even thinking of using the excuse that he or she thought a $40,000 gift was a $400 counterfeit is reprehensible. It shows very poor political judgement.

I wonder what the result would have been in the September 2013 election if Messers Abbott, Macfarlane and Robert were facing charges of breaches of the Trademarks Act? What does it mean for the Trans-Pacific Partnership or any of our bilateral trade agreements?

Accepting "fake" Rolexes is worse than accepting real ones.

Disclaimer:
The author primarily wears a 1966 Cyma watch and owns a 1970 Omega Flightmaster.