First Published in The Sunday Age, 1995

State Loses $10 Million, As Grain Board Goes To Farmers


In its privatisation of the Grain Elevators Board, the State Government appears to have lost up to $10 million for Victoria.

Several independent sources have confirmed that two bids were made, the successful VicGrain Limited bid of about $50 million and a second by Elders of about $60 million.

The State Government selected the farmer conglomerate VicGrain Operations Limited as the winners and sold the GEB - and all its assets - previously valued for the government at around $100 million.

The State Government agreed that Victorian taxpayers would shoulder the burden of $52 million in GEB debt to sweeten the deal, along with promises of a legislative timetable and other unspecified arrangements.

Some of the sources expressed concern that "confidentiality" arrangements were far stricter than necessary for a commercial transaction involving the sale of a publicly owned-asset. Several people close to the bids said they were constrained by very tight confidentiality agreements, in two cases questioning the need for them. The inaugural chairman of VicGrain Limited and retiring president of the Victorian Farmers Federation's grains group, Allan McCallum, said his consortium - composed of the Victorian Farmers Federation (70 percent), GrainCorp (the New South Wales equivalent of the GEB 20 percent) and the Australian Barley Board (10 percent) spent hundreds of thousands of dollars in assessing the GEB's value and when the initial one-to-one talks with the government broke down, stuck at a figure around $50million. 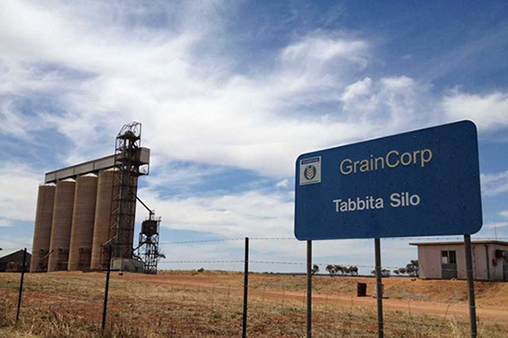 A Grain Corp granary.
(Grain Corp merged with VicGrain in 2000)

Mr McCallum said that rumors got around that Vicgrain was offering more, but the confidentiality agreements had been kept and the price was never discussed publicly. He said that if Vicgrain had lost the bid he would want to know what it got wrong, but defended the State government's secrecy.

"You can't have a tender process without confidentiality. You can't have four and half million people doing a deal," Mr McCallum said. He agreed that it was a "reasonable supposition" that full disclosure of the sale process of a publicly-owned asset would make the government accountable to Victorian taxpayers and end debate over the decision-making process.

"The government should be subject to review processes," Mr McCallum said, but added that he believed that was already in place through bodies like the Auditor-General's department.

One farming source close to the final sale was scathing of the government's business acumen. He told The Age that confidentiality agreements were intended by the State Government to prevent anyone raising questions over the sale of the GEB.

The source said that "a couple of young MBAs from Rothschilds" had valued the assets of the GEB - silos, port facilities and the land they stand on - at around $100 million.

While the farmer consortium stuck to its advised offer of around $50million, a negotiator said Treasurer, Alan Stockdale, wouldn't budge from the value he had been advised of more than $95million.

But farmer representatives said that there was no point in buying a business that generated no income. In a drought year, the GEB has little cash flow. As well, it was carrying a debt of $52 million and a superannuation liability of $17 million. The State Government has agreed the taxpayer will assume the GEB's debt, which will be paid from the sale price, with the State losing the assets.

For its $52.4 million, VicGrain becomes the owner of the port facilities in Portland and Geelong, including 60 acres of prime industrial docklands with silos, conveyors and rail systems and title to all the silos and the land on which they stand throughout the state.

The farmer source strongly criticised the Victorian government's business acumen. "After all their talk... they were desperate to privatize something," he said.

A source involved in the bid by Elders, also confirmed that the Adelaide headquartered giant had offered "around $60 million".

That source said there were "other things involved in the package" including guarantees on a legislative timetable and that the deal would be debt-free.

Invited to demonstrate the State Government's claim to have done a good deal for Victoria, a spokesman said the Vicgrain consortium bid "met the tender document requirements" and the Elders bid didn't.

The Treasury spokesman said the Auditor General and an independent 'process auditor' from outside the Government would review the sale and that meant there was effective transparency.

The VicGrain bid was said to be unconditional with finance available and the Elders bid, although higher, was conditional upon obtaining finance. Given the conditions of the tender document it is believed there was no choice but to award the GEB to VicGrain Limited.

Labor's Shadow Minister for State-Owned Enterprises, Theo Theophanous, told The Age that secrecy allowed the State government to lose up to $10 million in the sale price.

"It is quite clear from the new information that the government has managed by bungling the sale of the GEB to undersell by at least $10 million," Mr Theophanous said.

"It is also indicative of the risks for the people of Victoria of undue secrecy. If the Opposition and public had been aware of these offers then the Government might have been embarrassed into accepting the higher offer.