Feed The Birds And Shoot The Farmers


Victorian Environment Minister Ms Marie Tehan is quite right to put the greater state interests ahead of personal concerns for individual species - it's just that her arithmetic is wrong.

The sunflower seed growers of Eastern Victoria, who recently planted their crops where the galahs, cockatoos and corellas have lived for scores of millennia, are only a section of Victoria's sunflower growers.

The sunflower growers are, in turn, only a very small subsection of the Victorian Farmers Federation Grains Group, forced through union solidarity to publicly support a subsection with which they do not necessarily agree. 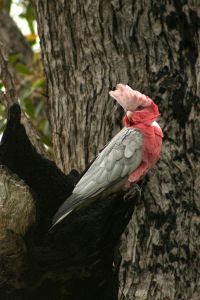 The tourism brought by Galahs is worth more than sunflower seeds.

In its turn, the Grains Group is only a subgroup of the Victorian Farmers Federation, whose total value to Victoria's Gross State Product (at factor cost) is only part of the $3,353 million generated by Agriculture Forestry and Fishing in 1996-'97, according to the latest Australian Bureau of Statistics data.

If you are still with me, that figure will become very important, particularly in that it is 2.91 percent of the Gross State Product for the year.

On the other hand, the galahs, cockatoos and corellas are part - albeit similarly as small a part as sunflower seeds to all farming - of the tourism attraction of Victoria.

The sectors involved in tourism: Culture and Recreational Services, Accommodation Cafes and Restaurants were worth $4,378 million in 1996-'97. That works out to 3.8 percent of Gross State Product at factor cost.

According to Tourism Victoria's strategic marketing and research division for the year ending June 1997, international visitors alone generated $1,446 million for Victoria. In 1995 the Victorian Regional Travel and Tourism Survey estimated the industry to be worth $3,447million, on direct expenditure alone, not including staff wages or multiplier effects.

So any serious economic rationalist concerned with the well-being of the State of Victoria could come to only one logical conclusion: feed the birds and shoot or poison the farmers.

Articles in The Basement

Feed the Birds and Shoot the Farmers

A look into the skewed "rationalism" of economics and farming.

Corporate Education: it's as easy as A.B.C.M.L.

When business and tertiary education meet an unexpected agreement you've got to wonder what's next.

Even when David Langsam doesn't want to protest, the system seems to make him protest. How the automated CityLink e-tag refused to acknowledge his support of it.

A Tale of Two Phone Calls